After 1898 crisis, Alfonso XIII was declared of legal age and started his personal reign characterized by the crisis of the restoration political system- Canovas was assassinated and Sagasta died.

The Conservative Party was led by Antonio Maura and Jose Canalejas became the leader of the Liberal Party.  Both had regerationist ideas but failed in making social improvements. 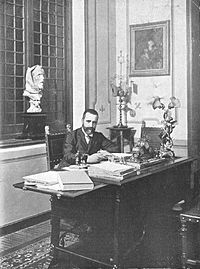 Until 1917 the main problem was the war against Morocco. The Algeciras Conference ended in a treaty dividing Morocco into two protectorates one for France and the other for Spain. The Spanish occupation in the Rif area caused a war with the inhabitants of the region. Many reservists from lower classes were called in 1909.

Protests arose soon and were known as the Tragic Week in 1909. The protesters´ repression was so bloody that liberals decided not to participate in the rotation of government.

In 1917 Spain had a crisis affecting three different areas:

Between 1919 and 1923 there was political instability which forced to form unity governments from all the parties facing different problerms but not solving them:

A coup d´etat promoted by General Primo de Rivera tried to finish with these problems.

PODCAST ON THE SECOND PART OF ALFONSO´S XIII REIGN