The stock market crash of 1929 was one of the worst stock market crashes in history. The value of stocks fell dramatically over  several days at the end of October 1929. Many people lost all  their savings and their homes. Businesses had to lay off employees or go bankrupt. The crash is the start of the Great Depression .

New industries such as automobiles and radios became more and more important. People thought everyone was going to be rich and that the economy would never stop growinThe 1920s (also called the Roaring Twenties) were a time of economic boom and business speculation. g. This optimism caused speculation in the stock market. Between 1921 and 1929 the stock market had increased by 600%.

The continous growth in the stock market was not based on reality. The economy could not continue to grow at such a speed forever. In 1929 the economy began to slow down. At the end of October, panic collapsed the stock market and people began to sell massive amounts of stock. The worst days were October 28th and 29th when values fell a total of 23%. These days were known as “Black Monday” and “Black Tuesday.” 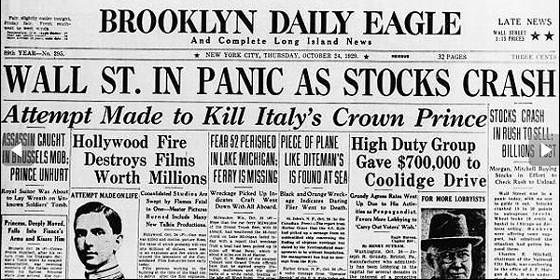 Although the market tried to normalized, it couldn’t recover. Over the course of a few months, the stock market fell around 40%. Many investors lost everything. It didn’t reach the bottom until the summer of 1932 when it had dropped 89% from its peak. USA experienced a deep economic depression.

The stock market crashed for a number of reasons.

Here are some of causes for the stock market crash:

When did the stock market recover?

The market reached rock bohttps://youtu.be/fFu7us6bNSQttom in 1932 and then made a mild recovery. It didn’t recover all the way to back to its peak value of 1929 until the middle of the 1950s.